My Name is Edson 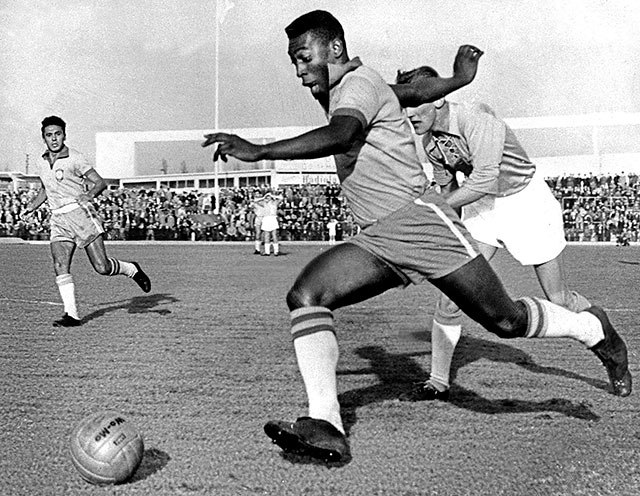 When Edson Arantes do Nascimento was born in October 1940 in southeastern Brazil, his parents decided to pay tribute to an American who’d died almost exactly nine years earlier. Because electricity had only recently been introduced to their city, Três Corações, João Ramos do Nascimento and Celeste Arantes named their first son after Thomas Edison.

Although there’s some debate over whether his parents meant to skip the ‘i’ in Edison or whether it was an inadvertent mistake on his birth certificate it didn’t really matter; before Edson even hit double-digits, everyone was calling him Pelé.

In a piece he wrote for The Guardian, Pelé said he could “never be 100 percent certain about the origin” of his famous nickname, but he has a theory that it could’ve been based on Bilé, the nickname given to one of his footballing father’s teammates. (Brazilian footballers love their mononyms: just ask Rivaldo, Romário, Ronaldo, Ronaldinho, and, uh, Fred.) “Because I was only young I somehow distorted the nickname and said that when I grew up I wanted to be a goalie like ‘Pilé’,” he wrote. “When we moved to Bauru, this ‘Pilé’ became ‘Pelé,’”

Although he wrote that he “[didn’t] mind” the seven-ish decades he’s spent as Pelé, last year he suggested to Italy’s Tuttosport that he might’ve preferred it if everyone knew his real name. “My name is Edson, then they started calling me Pelé,” he said. “I didn’t like it, I started arguing with everyone. I was a Thomas Edison fan. What is Pelé? Thomas Edison is important!”

Dude. So is Pelé.

Oh yeah, this little write-up was inspired by a question in this week’s Duh! video. Go watch it!

One of our favorite round concepts that we run at Geeks Who Drink pub quizzes is “Duh!” What’s that, you ask? Well, the best trivia questions are usually the ones that are right on the tip of your tongue—so obvious that you may not know the answer offhand, but you should. In our Duh! rounds, we take trivia lovers on a voyage through our face-palmiest questions. Will you get fooled by these obvious factoids?

If you like this video, go ahead and subscribe to our Geeks Who Drink channel on YouTube! If you love our pub quizzes, then you’ll probably like our videos. We’re not sure. We know our moms are really proud of us.